Chelsea manager Thomas Tuchel thanked the return of fans to Stamford Bridge for helping side avenge their FA Cup final defeat to Leicester with a 2-1 win over the Foxes to move into third in the Premier League on Tuesday.

The 8,000 crowd saw the Blues keep a place in next season’s Champions League in their own hands thanks to second-half goals from Antonio Rudiger and Jorginho.

Victory away to Aston Villa on Sunday will guarantee Chelsea a top-four finish.

“It was an outstanding performance but the job is not done,” said Tuchel.

“The fans made a huge difference. The speed in our game, the hunger, the ambition. It was a very strong performance and I’m delighted the team can present itself like this in front of our fans.”

Leicester will forever have the memories of winning the FA Cup for the first time at Wembley on Saturday, but are now at risk of missing out on Champions League football on the final day of the campaign for the second consecutive season.

Brendan Rodgers’s men still lead Liverpool by three points, but the Reds will go fourth on goal difference if they win at Burnley on Wednesday.

“We have to get the points on Sunday then see where we are. If we don’t get in the Champions League it has still been a great season,” said Rodgers.

“If we just fall short after 38 games as the team with the eighth biggest budget, it shows we fought really hard and just missed out. There are still points to play for and we’ll be ready for that.”

Chelsea’s final league game under Frank Lampard was a 2-0 defeat away to Leicester in January that opened up a nine-point gap between the sides.

The 10-point swing since is illustrative of the impact Tuchel’s arrival has had on the Londoners with their first major disappointment under the German coming at the weekend.

Roared on by the biggest crowd at Stamford Bridge for 14 months, Chelsea exploded out the blocks with Leicester barely able to get out their own half in the first 45 minutes.

However, a combination of goalkeeper Kasper Schmeichel and controversial refereeing kept the hosts at bay until the break.

Timo Werner had two goals disallowed in the first half as the German international was firstly flagged offside before his second effort was ruled out by a VAR review for handball.

In between times, Werner was also dismayed that he was denied a penalty after being caught by Youri Tielemans inside the box.

With millions on the line for a place in the Champions League, that decision could have proved very costly for Chelsea.

But there was little doubt about the outcome once Rudiger bundled home a corner two minutes into the second half.

Werner finally got a VAR call to go his way to double Chelsea’s lead 24 minutes from time.

Wesley Fofana’s foul on Werner was initially given as a free-kick outside the box, but on review referee Mike Dean was told to point to the penalty spot.

Jorginho coolly sent Schmeichel the wrong way and for 10 minutes, Chelsea looked to be cruising.

However, Leicester set up a nervy finale when Wilfred Ndidi robbed Mateo Kovacic and teed up Iheanacho to slot home his 19th goal of the season.

The Nigerian also became the first player to score on all seven days of the week in a single Premier League season.

Leicester had a glorious chance to salvage a point and keep their top-four fate in their own hands in the final minute, but Ayoze Perez blasted over from Ricardo Pereira’s cut-back.

Tempers flared in stoppage time with both sets of players, substitutes and coaches involved in an altercation after Rudiger took exception to a challenge from Pereira on Ben Chilwell.

Chelsea, though, kept their heads to see out the final few seconds and take a huge step towards another season of Champions League football. 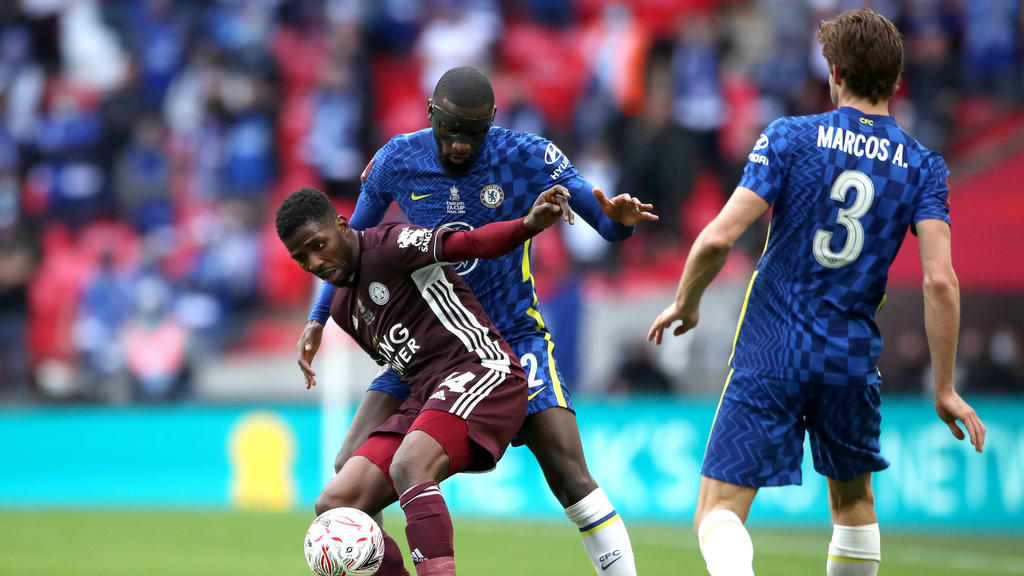